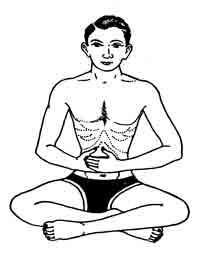 REFINING EXERCISE NO. 2 - This Exercise Deals with the Area of the Solar Plexus.

Put both the hands (palms) on the stomach, at the upper part of the navel. In this exercise, the upper portion of the stomach above the navel should be light. Take deep and swift breath along with the musical rhythm at the speed of 36 breaths per minute, as done in exercise No. 1. Be attentive that the stomach should go out while inhaling and go in while exhaling. The entire breath is restricted only to the stomach, abdomen area.

Maximum on minute in the beginning. Once you are comfortable with a minute, increase by about ¼ to ½ a minute per month till you reach 3 minutes.
*Please note that the duration should not be extended beyond 3 minutes.

This is the area where the digestive fire is created, so the proper creation of this ensures general health and toning up of the abdominal glands. Intestinal peristalsis movement is toned, so the passage of food becomes easy and we do not suffer from constipation. There are many other organs and glands in this area which get massaged by this exercise - the kidney, liver, pancreas, spleen etc. The pancreas are not exactly and endocrine gland but have a group of cells called Islets of Langerhans which have endocrine tendencies and produce insulin which digests sugar. They also produce valuable digestive juices and play an important role in calming or neutralising the production of adrenaline. On each kidney is a small gland called the Adrenal Gland. They produce adrenaline, which is important for self-preservation. All the gleans are massaged and toned by this exercise.

If the adrenaline gleans are not working properly, it leads to passive, moody and depressed introspective ‘ Types’. If the pancreas is not complementing the adrenaline glands properly, it leads to impulsive nature, irritability and anger. But the proper and balanced working of both gives vitality to a lethargic person and tranquility to an overly anxious person. Further, the pancreas is like a sponge as far as negative emotions are concerned, absorbing and holding them, which makes them repeat all the time, thus creating a granthi in this area.This is also the area of Power (according to the Chinese, chi energy is generated here.) But this power must be positive, which can only happen when we overcome the granthi of fear. Most importantly, this is the area of [A] Instinctive Fear [B] Lower Animal Nature.

When the organism is in danger, we feel fear in this area. This causes the adrenals to secrete adrenaline which has the effect of speeding up the physiological processes, making the mind sharp and alert, heartbeat faster, respiration rate more rapid, thus preparing the body for a more intense level of activity. What is commonly called fight or flight.

The problem actually starts when we start to convert this Instinctive fear in to Psychological fear. We start living in the fear complex of 'what will happen tomorrow'. This creates an imbalance in adrenals and leads to an imbalanced secretion which in turn acts as poison. When this becomes morbid, we start fantasizing fear and craving for security.

This fear complex creates a granthi or blockage in the Solar Plexuses. Due to this we degenerate further and start using a negative form of power to overcome our fear. This reads to manipulation of people, unbalanced accumulation of economic power (on which our society is presently based) and gathering of Occult powers and in the manipulation of which a lot of persons are stuck. Fear does not allow our life to flow nor gives us the necessary level of receptivity to enjoy every moment of our life.

Sanskaras are gathered on the downward arc of involution. These are our lower animal instincts i.e. we still have all these cells in our body and for any inner evolution to take place these must be transformed. In ordinary Hatha Yoga the student makes the energy of Kundalini rise through the Sushumna Nadi, but this energy gets stuck at the Manipura. Shri Tavariaji calls this the energy of regeneration which is formed by making a circuit at the Muladhara and Swadhisthana (Phase Exercise). As this energy rises, the lower animal nature at the Solar Plexus pulls it down again and this energy is not allowed to rise beyond the Manipura. Again, in orthodox Hatha Yoga practices the student does special Pranayamas which generate tremendous heat in the body brain system. This heat is responsible in burning this lower animal nature or the animal sanskaras. The problem is that there are many dangers on this path and which can have many bad side effects on the body brain system. Here once again comes Tavariaji's magical rhythm -3SRB which over. a period of time cleans and eradicates the animal sanskaras avoiding the dangers involved in other practices.

Shri Tavariaji said - "This area, the Manipura Chakra, is a center of animal instincts and has to be totally cleansed of all psychic nature. All memory patterns pertaining to this area have to be destroyed, obliterated like pest control by the rising energies. This takes some time for it amounts to cleansing out "Aegean stables". When this Manipura chakra is cleansed, Kundali center begins to work and not otherwise. "

By doing this exercise once the granthi of fear is dissolved and transformed to its pure biological form we start feeling the awe and excitement of ordinary living. The balanced adrenals with the higher energy connections with the Manipura Chakra established, enable us to live at the higher intensities of "fight or flight" but conscious and relaxed. Whether listening to a bird song, watching a sunrise, or just plain walking, we feel within us a newfound receptivity, which previously was hidden from us. We learn the art of laughter, whether at otherwise, thus becoming “LAUGHING BUDDHAS” or ourselves. Manipura literally means 'City of Jewels' and once the lower animal nature is obliterated, life truly becomes a "CITY OF JEWELS".